I decided to cook today. The recipe is one of my own: lemon cilantro chicken soup. I've made it before and each time it's a little bit different. I used the bare minimum of dishes (I hate doing dishes). It's SO easy. It's also celery-free, since celery is of the devil.

Ingredients:
Pour 2 boxes of the chicken broth and the barley into a large pot and set it on the stove on medium heat. While the broth is heating up, cut up the turnip, carrot, potatoes, and mushrooms, adding each to the broth as you cut them up. Cut the carrot and turnip small, and cut the potatoes into quarters. Slice the mushrooms  thick.

At this point, the broth should be boiling.

I purchased the chicken the night before so it would be cold when I needed it, otherwise it would be too hot to rip apart. Tear it into small pieces with your hands (the most fun part) and toss it in the pot. (Maya sat patiently at my feet, hoping something would fall.) Take about half of the bunch of cilantro, chop fine, and toss in. Squeeze the juice of the lemon into the pot, making sure not to include the seeds.

If you notice that the soup is getting a bit thick, you can add more broth or water.

Add the 2 cups of pasta, cover the pot, and leave it to simmer for 15-20 minutes, or until the pasta is cooked. 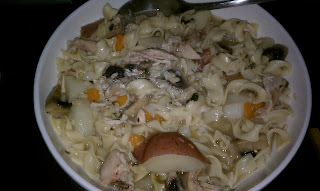 And that's it! Cleanup is super easy; I only had the knife and cutting board to wash.

It's so fresh and summery with the lemon and cilantro. After refrigeration, the broth will get absorbed by the pasta, so I keep a box of chicken broth to add before reheating.
Posted by Haydia at 9:00 PM