Halloween is one of my favorite days of the year. I used to make my own costumes and my sister would throw these amazing parties. She lives in an old Victorian house and we would dress the whole thing up like a haunted house. So much fun. But since the nieces have been around, they've toned down the scary, and I haven't made a costume in years. I made my last costume in 2003. I went as Cleopatra. I hand beaded my gold gown and wig. I even made my shoes. It took me 4 months to complete.

One of the most fun I've had in recent years was helping a friend out who set up a haunted walk through for her little sister's Halloween party. I've been on haunted hayrides and haunted corn mazes and I love them (I'm going to one on Friday!), so I jumped at the opportunity to participate in one. We went to a thrift store to buy our costumes. I ended up with a white lace dress that fit horribly and thick black tights because it was cold. The others got more standard horror costumes. We had Mike Meyers, the girl who crawls out of the tv from the Ring, a female vampire, some scary hooded people, and a menacing lumberjack.

We showed up to my friend's mother's house with lots of spooky supplies and a basic game plan. We were going to spookify the backyard and scare the kids. Then we ran into a snag. The weather called for rain all evening. That did away with our plans for the fire pit and basically everything else out in the open. So we moved most of it to the first floor, into two outdoor sheds, and under a tarp below the deck. We had black lights, fake blood, fake heads, skeletons, random body parts, a smoke machine, and a strobe light.

It was all set up, we were dressed and in position, the smoke machine was going, the lights were flashing, but how do we get a bunch of 9 to 12 year olds to walk through like we want them to? I came up with a story.

While everyone waited in place, I went up to the party and gathered the first bunch of little kids around me. I knelt down (because I'm short, but not THAT short) and told them about my ex-boyfriend, who had a really bad temper was looking for me. And I'm super scared, you guys, and do you think you all can come with me, cause I'm really really really super scared and I don't want to go down there by myself cause I think he may be out there somewhere? And I put my hands out and the little girls closest to me grabbed on because I was starting to freak them out and one little girl asked me why my hands were shaking and I said "because I'm so scared!" and I think she was ready to cry. (Full disclosure: my hands used to shake all the time because of my headaches. For a while my doctor thought I had MS. I don't. They don't shake as much anymore, but it worked to my advantage that day!)

So I walked them down the front stairs to the first floor entrance which was through the garage. Sitting at a table was the girl from the Ring. She was poking at a plate of jello entrails and grinning. I told the kids not to make eye contact and hurried past. They were freaking out. It was working. We went out into the yard under the deck which was covered with a tarp so it was all enclosed. With the smoke machine, it was hard to see and the fake blood was splattered all over the place. I walked them slowly through. Two of the hooded scary people were hidden in the corners and jumped out as we were nearing the exit. At that, the kids screamed and I started running across the lawn to the first shed with Mike Meyers chasing us.

The shed was shaped like a little house with windows and a little door. We had set it up as a sacrificial altar with our vampire and the Ring girl (who had snuck out while we were under the tarp) laying in wait inside. I led the kids into the shed and slammed the door shut behind them. Mike Meyers and I banged on the windows and walls while the vampire and the Ring girl did I don't know what to them inside for about 30 seconds, then I opened the door and yelled at them to FOLLOW MEEE!!! which they did, past the second shed, where MY "EX-BOYFRIEND" JUMPED OUT AT US WIELDING AN AXE!!!!!!!!! which he swung at me, then we all ran back to the house with all of us screaming.

We did it over and over for different groups of kids. It was starting to rain pretty hard, so we had to wrap things up. On the last run, instead of me escaping with the kids to the house, my "ex-boyfriend" caught me, dragged me back to the shed, and swung the axe then squirted me with fake blood, so the last thing the kids saw before they went into the house was me standing in the yard in the pouring rain with blood soaking my white dress, screaming my head off. I'm pretty sure all of those kids are going to need therapy.

It was seriously the best Halloween ever. 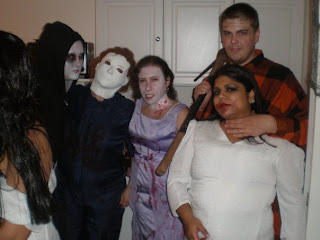