It's that time of year again. Time to gorge myself on turkey, mashed potatoes, mac and cheese, and pumpkin. Oh yeah. And reflect on what I'm thankful for. As I sit here waiting for Steve to get ready to head over to my sister's house, I think about the long, tough year it's been and all that I have to be thankful for.

I'm thankful for the return of Excedrin Migraine.

I'm thankful for a healthy family. 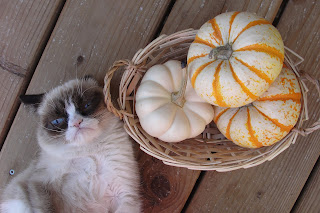 I'm thankful for coworkers who embrace and encourage my Internet cat addiction.

I'm thankful for stretchy pants which allow me to ignore the fact that changes in my meds have caused me to gain ungodly amounts of weight in the last few months.

I'm thankful for best friends who still take me on lunchtime shopping trips with them, despite the fact that we no longer physically take lunch together.

I'm thankful that I will not be alone this holiday season, for the third time in a row.

I'm thankful for the man who is keeping me sane and happy this holiday season.

I'm thankful that said man understands my quirks and loves me in spite of them.

I'm thankful for my fluffy cat who kept me warm through the 11 days I was without power or heat after Hurricane Sandy.


What are you thankful for?
Posted by Haydia at 9:29 PM No comments:

We were about a half hour from the hospital and in some awful traffic when I heard a cell phone ring and my mother answered. I heard her say "Oh no. Inna lillahi Wa inna ilaihi Rajioon." My heart stopped. She has just recited the dua you say when you hear that someone has died. My grandmother had died and I had missed seeing her one last time by a half hour. And I had to keep it together because I was on the BQE in heavy traffic with a car full of people, two of whom had just lost their mother.

My father's mother, or Daddee-Ma, as I called her, was my last living grandparent. She lived in Long Island with my father's youngest sister and her two children.

I got a lot from Daddee-Ma. Physically, you could see that I am her granddaughter. I got her round arms. I got her short fingers. At the funeral, I sat next to her sister and was amazed at how similar our hands were.

I'm not sure what I wanted to say. I'm sad today. I regret not seeing her more. I miss her. I think was harder at her funeral because it felt so unexpected. With Ma (my maternal grandmother), I was there for her life, her sickness, her death. With Daddee-Ma, I missed so much. And now it's too late.
Posted by Haydia at 9:21 PM No comments:

Warning: sappiness and gooey love within. You have been warned. Read at your own peril.

When I was younger, I thought that the man I would spend my life with would be my other half. He would be my knight in shining armor. He would sweep in on a white horse and solve all my problems and we would live happily ever after and life would be complete once he was in my life. Now that I'm older, I know that love doesn't solve your problems, but having someone who loves you makes your problems easier to bear.

The man I love brings me joy. He makes me stronger. He makes me laugh. He understands me. He has seen me at my best and my worst. He's my best friend. He's the first person I want to talk to in the morning and the last person I want to talk to at night. He knows me better than anyone else. He sees my weaknesses and doesn't judge me for them, but allows me the room to grow and become a better person.

Babe, I can't give you the world for Christmas. I wish I was rich. I would buy you iPads and mixers and cars and guitars. But I can't. You have been so amazing to me and I want you to know how much I love and appreciate you. I used to hate Christmas. Now I look forward to sharing this season with you. You've turned me into one of those sappy, lovey, gross, happy people! I love you. Merry Christmas.

Posted by Haydia at 8:36 PM No comments:

Yesterday was incredibly sad. The sight of the baby in a coffin is one of the most awful things I've ever seen. It was heartbreaking. And seeing how destroyed my cousin and his wife were was hard to take in. I've been to many funerals (a perk of having a huge family) but this was by far the saddest.

As is Muslim custom, the viewing at the funeral home was brief, with a short talk given by the Imam. After, we all went to the burial ground for prayers graveside. We each gathered a handful of earth, split it in three, and tossed it into the grave. My cousin and other male relatives began to fill the grave. Then the back hoe came. That part is awful, watching this huge machine fill in the grave. And it takes a long time. I stood there with my cousins. It was comforting to have them there.

My paternal grandmother (who passed away in January) is buried not far from the baby's grave. After the funeral, a bunch of uncles, aunts, and cousins walked over to see her. One of my cousins pointed out that her grave site number, 130, is easy to remember because her birthday is January 30. I thought that was sweet. And it does help. The first time I went to visit her, I couldn't find her. I had forgotten her number. (Her permanent marker isn't in place yet. We have to wait until the ground settles because it's a flat marker, not a large headstone.)

Afterward, we all went to my cousin's house for food and company. A bunch of cousins wanted to go to the movies, so I joined them. It was nice spending time with them and sharing a much needed laugh. It made the day bearable. I only wish the circumstances of us hanging out could have been happier. It seems like I only get to see most of them at funerals.

So that was my Tuesday. And me being me, I had a huge headache the whole time. I took pain killers before we went to the movies and got pretty loopy. I think my cousins were amused.

I completely forgot this part! Between the burial and my cousin's house, my sister and I went to buy samosas and pick up the nieces. We went to Shalimar in Edison. Because I hadn't really eaten, I ordered a samosa and butter chicken to eat while our order was being made. My sister went out to park the car and saw two of my cousins on Oak Tree.

I was sitting at a table next to a young black lady with a baby in a stroller. We started chatting. She was having difficulty eating while holding the baby, so I offered to hold him while she ate, since I was done and just sitting there waiting. She gladly handed over the little guy. So I bounced him around and chatted with him while she ate. I noticed he had a bandage on his arm so I asked if he was ok. She said he has thalassemia and had just come from the doctor's office for tests. I asked how old he was. She said he will be 4 months on September 5. I almost started crying. The baby who's funeral I had just attended would have been 4 months on September 6. It was an incredible coincidence.
Posted by Haydia at 5:06 PM No comments:

My family lost its newest member today. My cousin's son passed away this morning after fighting to hang on to his life for just over 3 months. He lived his entire short life in the hospital.

He was born with a slew of medical problems. I take solace from knowing that he's no longer suffering.

I am heartbroken for my cousin. I can't begin to understand what he's going through. The funeral is tomorrow.
Posted by Haydia at 10:56 PM No comments:

I recently read some articles about green burials. These articles discussed a rising trend in people choosing to be buried in a way that doesn't add inorganic materials (embalming chemicals and metals from clothing and the casket) to the earth. Green burials are meant to return the body to the earth in as natural a state as possible. I know that sounds treehugger-ish and New Agey, but isn't that what is meant to happen when we die? Isn't it "Ashes to ashes, dust to dust," not "Unable to decompose due to chemicals"?

Having been raised Muslim, I have always been a bit horrified with "Western" burial practices. It seems wrong to have complete strangers handling the body of the deceased and to have them pumped full of chemicals and placed in an incredibly expensive box whose sole purpose is to rot in the ground.

I'll provide some perspective. My maternal grandmother passed away a few years ago. She lived with my family, so I spent most of my life with her in the house. I was devastated when she passed. She died early in the morning at home, with my aunt at her bedside. The funeral took place the day that she died, as per her wishes, and only female family members handled her body. No stranger touched her. Her body was handled with love and respect by people who cared for her. Her daughters and several of her granddaughters washed her body, which was always covered with a cloth, and wrapped her in a plain white cotton shroud. She was then placed in a simple pine coffin that had wooden pegs to hold it shut. (In Guyana, they don't use the coffin. The body is placed directly in the ground. I believe we were required to use a coffin here.) There were no chemicals involved. We used only water and camphor to bathe her.

I was surprised to find that doing this wasn't as hard as I thought it would be. There were no tears while we prepared her. We spoke to her and let her know we loved her and were abiding by her final requests by laying her to rest as her religion dictated. It was like saying a final goodbye. After a short religious ceremony, she was buried in a Muslim burial ground before the sun set.

As I understand it, "Western" burials involve embalmers, funeral homes, and expensive coffins. I couldn't fathom having my loved ones handled by complete strangers in death. I wouldn't want that for me. When my paternal grandmother passed away in January, I had to explain to the nurse (who was removing the covers from my grandmother) that we do not expose the deceased's body out of respect. She was very accommodating, but I was surprised that this wasn't the norm.

Even if my family wasn't Muslim, I would still want to have a green burial. Am I alone in this? Has my upbringing caused me to think like this? I'm curious.
Posted by Haydia at 8:54 PM 2 comments: